Making a difference and spreading awareness 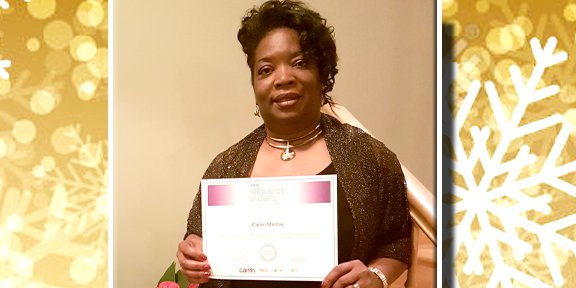 Caren Mellow recognized as a Difference Maker. She stands among 150 Leading Canadians for Mental Health

Ten years as a psychiatric nurse and a health teacher at a school where students confront almost daily multiple socio-economic issues, Caren Mellow knows a thing or two about the precariousness of mental health.
That’s why over the past four years she has been doing her part to heighten consciousness at her school, ACCESS Riverside, among students and co-workers and in the community.
Her annual walk staged in May, aimed at “breaking down stigma and promoting mental health awareness,” is growing in popularity and has placed her in the national spotlight.
Mellow was one of 28 Quebecers who are among the 150 Canadians recognized by the Centre for Addiction and Mental Health (CAMH) as a Difference Maker, as someone who “made a difference through research, philanthropy, advocacy, social change or inspiration” in changing the course of mental health.
CAMH, which is an affiliate of the University of Toronto, is Canada’s largest mental health and addiction teaching hospital and a world-leading research centre in the field. It’s also a collaborating centre with the Pan American Health Organization/World Health Organization.
In January 2017 it launched Difference Makers: 150 Leading Canadians for Mental Health with a cross-country call for nominations.
By the deadline on Canada Day 2017, more than 3,700 names were put forward and Mellow had the distinction of being recognized for her efforts in the promotion of mental health awareness.
On Wednesday, November 15, the 28 honorees from Quebec were recognized at a celebration ceremony held at the 4th Floor auditorium of the Montreal Stock Exchange, where a line-up of health care professional and business partners were on hand to speak on the initiative.
Mellow was the only Black person chosen for her efforts. Among the others is a laundry list of doctors, academics, workers and advocates from the mainstream community, including the mother of Canada’s prime minister, Margaret Trudeau.
“This recognition is not something that I expected,” Mellow told the CONTACT. “I believe in the promotion of mental health awareness because I know the impact the disease can have on families and our tendency to try to push it under the rug.”
She says there is still a lot society can do to assist those in the throes of mental illness.
“At one level, the easiest response is to treat it with a pill and hope for the best or in our community, many families still see it as a taboo and try to hide it. Over the years I realized that speaking with those who are affected is a big part in helping them deal with the disease,” says Mellow.
Her dream is to one-day see students from across Quebec, and eventually Canada,  “walking together in support of mental health awareness.”
And she remains grateful for the unflinching support she has had over the years from her husband and two children.
A national ceremony to honor Mellow and the other laureates will be held in Toronto next year, where the prime minister and other dignitaries are expected to attend.