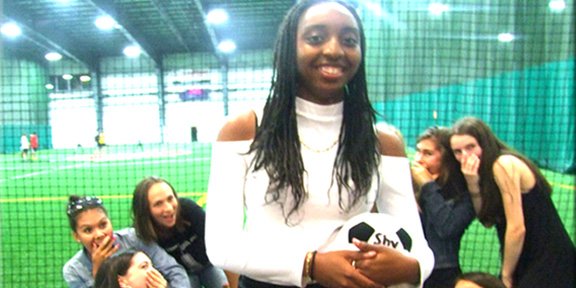 Expressions of congratulations and joy were in free-flow at the Catalonga Lounge of the Soccerplexe in Lachine where friends and relatives gathered for the send-off party for Osamede Iyare on her way to the University of Memphis where she earned a full scholarship.
Iyare was recruited out of John Rennie High School and Lakeshore Soccer Club where she had standout careers as a star midfield player. She also played for Quebec’s Regional team from 2014-16.
Last year, the 17-year-old was part of the Lakeshore team that won the 2016 Canadian National Championship, scoring the two goals that earned the team the title.
At a sit-down with the CONTACT at her going-away party, Iyare spoke about looking forward to the new adventure of living away from home and playing in the NCAA. As of publication time, she has already moved to Memphis and is preparing with her team for their first game in August.
She says she is excited about the scholarship and the prospect of helping the Memphis Tigers make it back to the NCAA Tournament, following their success in it over the past two years.
Although she doesn’t expect to be a starter, she thinks that she soon will be able to earn her place on the team and display the incredible talent that caught the eyes of the coaching staff of one of the top colleges in the U.S.
“Soccer has been the biggest part of my life for the last ten years or so. I play almost every day. Now I’m really looking forward to playing at the next level,” she says.
On their website, head coach Brooks Monaghan sees Iyare as a welcomed addition to the team.
“Osa is a great addition for our program. She is a very talented player and as a midfielder she reads the game very well, she is technical and is a great distributer of the ball,” said Monaghan. “If she comes in and makes a smooth transition to the college game, then there’s no doubt that she will make us better. The quicker that she transitions, the quicker she will be on the field helping us.”
Iyare, who has won her share of academic awards in elementary and high school, is   also looking forward to going after her dream in securing a degree in Journalism and Advertising.
Surrounded by a big and happy group at the Soccerplexe, the unassuming Iyare loves the fact that her scholarship has brought so much joy to relatives and friends, especially her mom Natasha Smith Lattimore and three brothers.
“Yes, my mom has been telling everyone she meets on the street. I guess she is really proud.”
The community is really proud, Osa, the community is really proud.