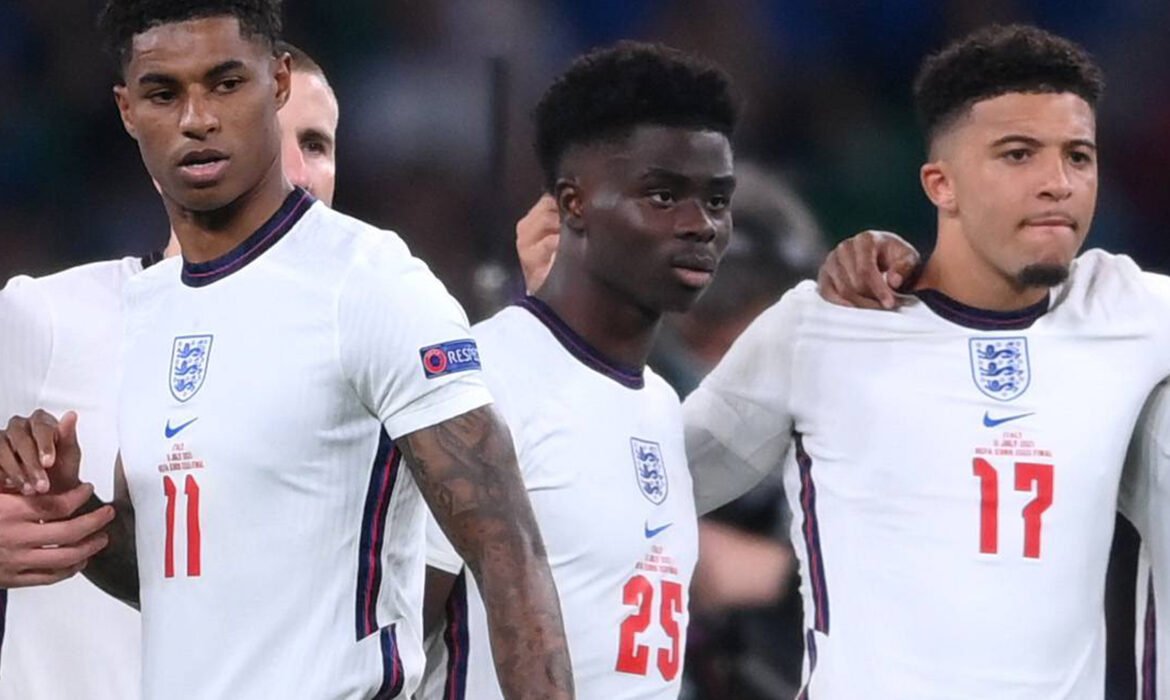 To heap blame on three Black players…. one teenager and two barely in their 20s… is irresponsible, malicious, cowardly and racist

If you remember, when Ben Johnson won the Olympic Gold Medal for Canada it was horah, horah for Ben and the country. Nothing was said about his original homeland, it was Canada all the way basking in the glory of Ben.
As soon it was discovered that Ben had taken a stimulating drug, which aided his convincing victory. He was disgraced, shamed and disowned by the once jubilant Canadians who quickly recognized him as the lowly Jamaica son.
In the mean time, Jamaicans abroad and at home continue to accept the good Ben and the bad Ben, he is still one of us.
Like so many others, I watched the EURO Soccer Final on Sunday. It was a must win for England since it has never won this prize and so was desperately hoping to break this bad luck cycle.
I also watched the semi final game between England and Denmark and I was very happy when England scored, but more so because the goal was scored by. a Black player from a pass from another Black player.
The second goal for England was from a penalty shot. England won by 2 : 1, which took them to the final against Italy.
In the final game England scored early within the first two minutes of play. Italy tied it up and even with overtime, no other goal was scored. So down to the wire … it came down to the dreaded penalty shoot-out.
I was really sad when Italy won, and very disappointed when the three Black players did not score in the shoot-out. Immediately I knew that there were going to be some nasty repercussions, the blame game. Suddenly
Blackness must be blamed for not scoring, totally forgetting that with a penalty shoot-out, skill and experience may play a very small role in scoring, as the game is left to chance and guessing.
Without a hint the goal-keeper decides to go left or right. The kicker also goes left or right.. By chance if the ball is kicked to the right and the goal-keeper moves to the right, there is a strong possibility that a goal will be saved.
When the ball and the goalie are moving in the same direction it is hard to score. But when the goalie and the ball are going in opposite directions most times there will be a goal scored.
The side the player chooses to kick the ball and the side the goalie decides to go may just be an immediate gut reaction… or pure guessing.
So England lost the game because its Black players guessed incorrectly while the Italian goalie guessed correctly. What a way to lose or win a game.
Skill was no longer the issue, Blackness is not the issue…. guessing correctly is the issue.
While I would have been very happy that England won and also happy that the Black players had scored , this does not take away anything from their skill and professionalism.
If they were not very good players they would not have made the team, remembering that, which is often said that a Black person must be twice as good as a white person to even be noticed.
Those Black players on the English side wanted to win for England, for themselves and for Blacks all over the world. They know, also that more is expected of them.
To heap blame on the three Black players…. one teenager and two barely in their 20s… is irresponsible, malicious, cowardly and racist.
Fortunately their inclusion on the English team was never based on their ability to guess, or on their colour, but on their athleticism and decency.
The British Prime Minister Hon.Boris Johnson wants all who are pointing your nasty racist fingers of accusation, to crawl back into your racist holes and stay there.
I BEG OF YOU , PLEASE FOLLOW HIS INSTRUCTION.