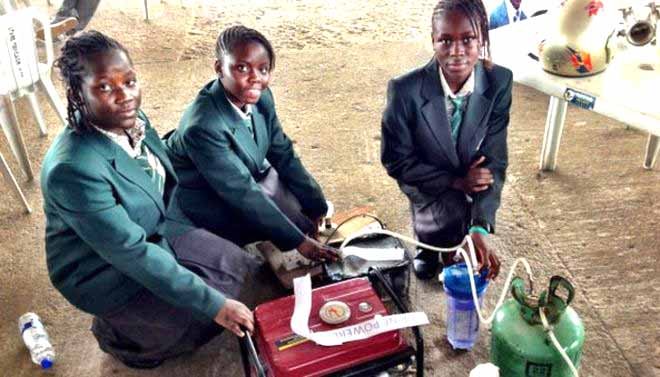 Are four young Africans on the cusp of a viable 21st century discovery, or will this one be like others I’ve heard about, but which quickly evaporate like steam?
So, someone recently sent me a WhatsApp message with a bold message: “Share this! Let’s make them famous because the media won’t.” Below is the notation @BLACKBUSINESS.
I consulted Google and a world of Black businesses exploded on the computer screen. Tapping into a few of them, I wasn’t seeing what I wanted.
After trying a few other search phrases, a whole lot of phrases germane to the subject, began to open up, multiple articles offering different takes on the subject, four Nigerian high school girls and their invention.
Such as this one: Does Nigerian Girls’ Science Fair Project Turn One Liter of Urine Into… Urine Powered Generator?
It’s the Internet, ‘information-at-your-fingertips’ technology. There are multiple short articles about those four high school girls to peruse.
When I read that WhatsApp message I thought it was a recent (more current) story. But as I delved into it, I realized that it’s at least six years old; one article was dated 8 November 2012. Which made me wonder if there’s a later date. More importantly, I’m curious to know if the girls, who are older now have been able to secure financial resources to further develop (perfect) their invention in order to make it commercially viable.
That’s the objective of every inventor.
As a regular BBC News… watcher, I occasionally… regularly see interesting stories, which Focus on Africa (in fact, it’s the name of one of the programs which features stories specifically related to developments on the continent). And as I wrack my brain I think I might’ve seen a story on those Nigerian High School girls and their invention. One can only hope that, as the saying goes, they’ve been able to take it to the proverbial next level.
Africa needs all the technological help she can get, especially ‘home-made’ ones, created to address the specific needs of its many countries.  I’ve concluded that she can no longer depend on the international community—the ‘help industry’ and something about their affliction, “donor fatigue.”
Understandably, they’ve “given” so much to Africa, at least that’s the thinking… But their giving pales in comparison to what the international benefactors and ‘benevolents’ have individually and collectively plundered… and continues to extract from the African continent going over centuries. And the not-quite-rosy continental condition notwithstanding, she continues to grow… produce all that the world needs, that is except its people…
Benefactors and benevolence are lovely, soothing words, but looking at the current socio-political state of the world, God knows Africa is no longer relevant – at least not in terms of its people and its place and role in terms of matters of the world.
Actually, based on those television images we’re bombarded with almost daily of Africans crossing the Mediterranean tells me that the chaotic state of the continent, and hopelessness of people, are two of the primary reasons many continue to risk their lives in search of safe havens…
But the traditional “help” providers across the world are tired of benevolence and benefacting… and all those Black people attempting to land on their shores.
So maybe smart, industrious people like those four high school girls who are bringing their imagination and curiosity to the fore will in the long run be the ones to help shape a new Africa by ending the generational brain drain. [Actually I’ve heard, and read, such sentiments in panel discussions and various publications.] A veritable reverse migration across the Mediterranean and other points?
But in order to translate all that Nirvana-like talk and thinking… into 21st century reality, Africa’s post-colonial generation(s) of myopic, self- and family-serving breed of political leaders – with a handful of exceptions – who have been born with colonial blinders, which most seemingly are incapable of removing… They’re unable, or simply refuse, to see how the rest of the other inhabited continents of the world continue to evolve and develop, by bringing their former colonial countries into the 21st century. Look at some countries in the Middle East, Asia and other parts that have been under the thumb of colonialism, dictatorships and political and military conflict, yet were able to free themselves… to focus on the bigger picture and common good.
Those four Nigerian high school girls, and others of that ilk, are evidence that given the right conditions much good is possible on the continent.
There’s no way Africa can get any worse than it has been and currently is.
Here’s a propitious extract from one of those Internet articles:
All over Africa, young men and women have missioned across the country and arrived in Lagos, Nigeria. All they want to do is show off what they have made. Maker Faire Africa is more than your typical startup event: it actually shows off innovations, inventions, and initiatives that solve immediate challenges and problems, and then works to support and propagate them. Put another way, this isn’t just a bunch of rich people talking about how their apps are going to change the world.
These four girls may not end up doing that either, but their efforts definitely stand more of a chance than yet another hyper local social cloud app. Their efforts should not go unnoticed because if this is what they’re doing as teenagers, I really hope they have the funding they need to be revolutionizing lives when they’re adults…